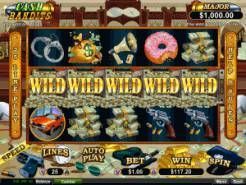 Play Now
Cash Bandits slots is a game that cannot be overlooked, not just because it is fun, but it also has a high return to player. This colorful game that follows the antics of a robber and his run for freedom being chased by cops can be played online and at mobile casinos. The online version of the game may be downloaded directly to the players computer and the player can enjoy it at any time that he wants or he can access the casino and game through the web browser of his casino, known as instant play and this is accessible through any laptop or computer. Another option is the mobile version of Cash Bandits slots, this can be played through the mobile web browser of any Android or Apple device or the player can download the online casino app that sits on the home page of the casino and is always available for tapping and accessing. All options offer the same game with the same generous rewards and colorful characters.

Basics of the Game

Cash Bandits slots is a produced and maintained by Real Time Gaming, one of the leading software companies of current times. There are five reels and twenty-five paylines in this game where players also have the chance to win a progressive jackpot at any time during the real money version of the game. There is a minor and a major progressive jackpot and each one increases in value with every real money bet that is placed at any of the casinos offering the game. Symbols in the game all relate to the subject matter of a thieving robber. There is a bank, a cop cart, donuts, dollar signs, cops and robbers’ shields, megaphones, money bags, vaults and the thief himself. Players can place multiple bets per spin on all or some of the paylines choosing coin sizes that range from $0.01 up to $0.25 with a maximum bet of $6.25 possible. There is also an auto play option for players that like to preset the number of spins each game runs for and this can be stopped at any time and the player reverts to manually hitting the spin button.

All the payouts of this game are detailed on the pay table of the game. The pay table can be found on a separate screen and it details the payouts for each symbol when lining up three or more of the same and the bonus symbols. The wild is the vault symbol and this can substitute for every symbol in the game apart from the cops and robbers shield. On its own the wild is also a super high paying symbol giving players up to 2500 coins when five appear on an active payline. The scatter symbol is a multiplying symbol paying out when three or more appear on the screen and in addition it is the trigger for the bonus game. Five of the scatter shields appearing on the screen award the player with 200x the coin bet placed in addition to a chance to play the bonus game.

Three and more of the scattered cops and robbers’ shields symbols triggers the bonus game. In this game players can win up to 90 free spins with up to a 4x multiplier for the free spins. The player is presented with a screen holding four different safes and a keypad with multiple numbers. The quicker that the player solves the codes and opens the safes the more free spins he can win. Initially the player is awarded with 5 free spins and a 1x multiplier. Every safe that he opens within a certain number of moves can gain him an extra 5, 10, 20 or 50 free spins with the addition of an increased multiplier. Retriggering the free spins game awards the player an extra 5 free spins. And during the free spins, players can still win either of the random progressive jackpots at any time.
Play Now